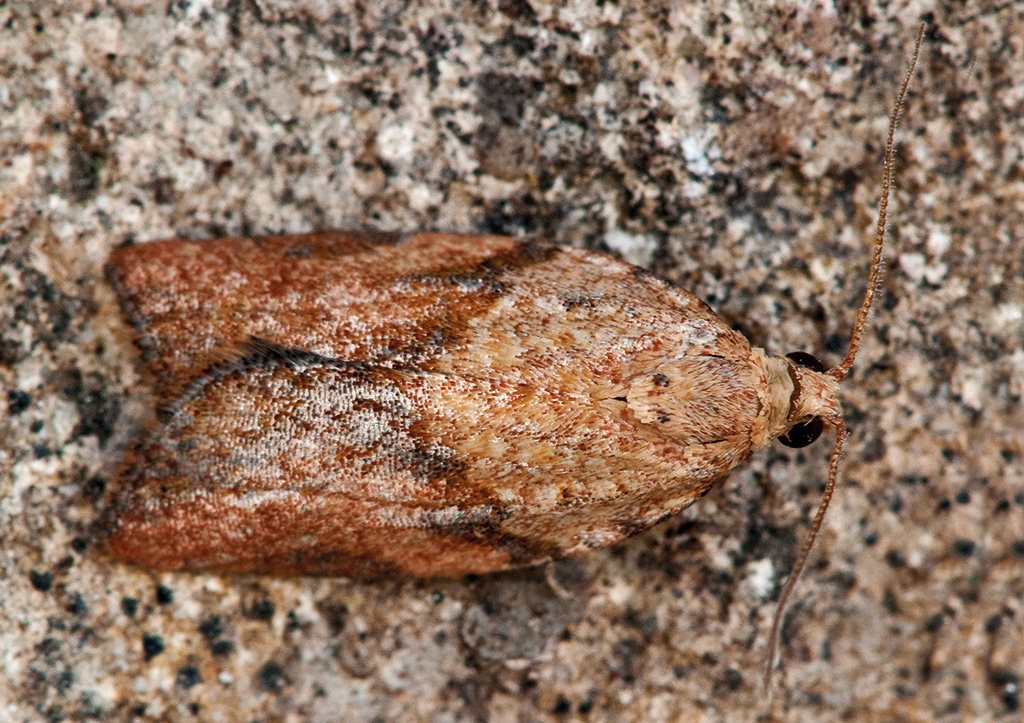 Larvae of the light brown apple moth eat pretty much anything — this is never a good sign in a pest. By Anna Mouton.

The larvae of the light brown apple moth have a seemingly limitless host range. They are known to feed on at least 545 plant species in 121 families. Commonly recorded hosts include all major pome and stone fruits, grapevines, olives, lemons, and many ornamental plants. Plants in the erica and protea families have also been noted as hosts.

Young larvae of light brown apple moths spin shelters on the surface of leaves. Older larvae make feeding niches by attaching leaves to each other or to fruit. They also fold leaves to construct the leaf rolls for which leaf-roller moths are named. Larvae feed on the surfaces of leaves and fruits. Some larvae enter fruit through the calyx and cause internal damage.

The economic impact of Epiphyas postvittana is partly due to direct damage and partly due to control costs. Fruit damage of 5–20% has been reported from its native Australia when pesticides were not used — the figure for New Zealand is commonly 50%. The 2008 United States Department of Agriculture budget for eradication, monitoring, research, and regulation of light brown apple moth was USD 74.5 million.

Epiphyas postvittana does not occur in South Africa. If it were to establish here, there is a good chance that it would threaten not only commercial fruit production but also native plants. There would be significant phytosanitary implications for any affected host.

How do I recognise this moth?

Leaf-roller moth larvae tend to all look the same. They start out nearly translucent and become darker with age. Mature larvae are green and have a darker central stripe and two side stripes.

Adult light brown apple moths are neither noticeable nor distinctive. The front wing is 6–10 millimetres long in males — in the same ballpark as codling moths — and 7–13 millimetres in females. They are light brown to pale yellow but the part of the wing that is further from the body is often darker brown. Some individuals have patterned wings.

How do these moths make more moths?

Female light brown apple moths lay eggs in groups of around 30 on the upper surfaces of leaves. A single female will lay anything from a few dozen to as many as 1 500 eggs. The total depends on factors such as larval diet and weather. Ribwort plantain and curly dock seem to be winner hosts for these moths.

Eggs hatch after 1–2 weeks. Larvae disperse by crawling or ballooning — spinning a silk thread that acts as a parasail. They then settle down to eat, moult, repeat, eventually growing to 1–2 centimetres in length. Larvae usually pupate in the shelters they constructed.

The rate of development of different stages of Epiphyas postvittana is determined by temperature. They do best at 20–25 °C but can develop at 7–31 °C. There is no winter dormancy. The light brown apple moth has 2–4 generations per year depending on the climate.

Adult moths obviously fly — males can travel at least 600 metres and females at least 300 metres. But the global spread of this pest was only possible due to human activities.

Where did it come from?

Epiphyas postvittana is an Australian native that occurs throughout the southwestern parts of the continent. It was possibly introduced into New Zealand more than once where it has become one of the most common small moths in cultivated and disturbed land.

In the United States, the light brown apple moth has been present in Hawaii for more than a century. It was first detected in California in 2005. Subsequent trapping found widespread populations in the state. Eradication efforts devolved into the so-called light brown apple moth controversy following a public outcry after the aerial spraying of pheromones in 2007.

The light brown apple moth has not been found in South Africa, South America, or Asia.

Control measures for light brown apple moths are similar to those for related pests like false codling moths.

Pesticide sprays are used in Australia and New Zealand. Light brown apple moth was reported to be adequately controlled by a codling-moth spray programme in certain areas of Australia. Pheromone trap thresholds can be used to guide pesticide applications.

The bacterium Bacillus thuringiensis kurstaki is used to control the moths on vineyards in Australia. Use on apples appears to be less effective due to more rapid degradation in open canopies.

Several parasitoids and predators attack Epiphyas postvittana in its home country. Some have been introduced to New Zealand as biocontrol agents. Their success appears to depend on the host plants used by the moths, as well as on the extent and type of pesticide applications.

All the information on this website is issued by HORTGRO (Pty) Ltd (Reg no. 2005/010343/07). Whilst all care has been taken in the provision of the information in this website/document, this information is provided without liability to us, our affiliates or any officers or employees of ours. Hortgro owns the copyright of all content and no information may be used or replicated without consent. Please find full disclaimer in accordance with the Protection of Personal Information Act, 2013. (Act 4 of 2013) here.
Back To Top